Concord, North Carolina (October 17, 2017) – Georgia driver Spencer Davis will have another shot at capturing his first victory in the ARCA Racing Series presented by Menards when the series returns to action for the Kansas 150 at Kansas Speedway on Friday night. 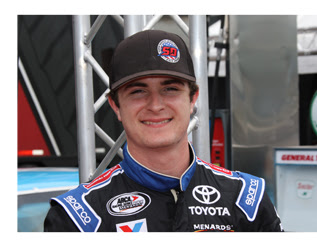 “I’m excited to get back into my Toyota Camry and mix it up with the guys in the ARCA Series,” says Davis. “We’ve got Musselman’s riding along with us this weekend – hoping we can give them a good showing in the finale.”

Since finishing third at Talladega in his series debut Davis has been plagued with bad luck. Coming off a season low 15th place finish at Kentucky the nineteen year-old driver is optimistic about turning things around.

“We’ve kinda had an up and down season. Kansas give us a great opportunity to turn things around and prove what we’re capable of doing out on the track. We’ve showed some speed but lately it seems we’ve had a ton of bad luck washing it all away. I’m ready to put the negatives behind me and focus on what’s important – Kansas”, added Davis.

In six series starts during the 2017 season Davis has notched just one top-5 to go along with three-top 10 finishes.

“Everyone wants to end the season on a high note – I know I do and know my guys want to. Everyone works hard at this and the success will come. Nothing would be better than ending it from victory lane.”

The Kansas 150 marks the 17th consecutive ARCA race at Kansas since the series debuted on the 1.5-mile superspeedway in 2001. Practice for the Kansas 150 is from 9:30 to 11:30 a.m. Oct. 20, followed by General Tire Pole Qualifying at 2:30 p.m. The 17th Kansas ARCA 150 is scheduled to get the green flag at 7:47 p.m. Fridaynight, with live coverage on FS2. ARCAracing.com will also feature Live Timing and Scoring and Live Chat of all on-track activities.

Concord, North Carolina (January 30, 2019) – After a record setting season Venturini Motorsports is back primed and ready for another successful campaign leading into the team’s 37th ARCA Racing Series presented by Menards […]

As the same with the past, Venturini Motorsports kept their cars at the top of the speed charts when it came to testing. Michael Self led the morning session while Justin Boston led the afternoon […]