DAYTONA BEACH, Fla. (Jan. 15, 2016) – With a steady rain Friday at Daytona International Speedway forcing cancellation of the opening day of preseason testing for the ARCA Racing Series presented by Menards, teams were left to their cars inside the garages.

With more time than usual on his hands, eight-time Lucas Oil 200 winner Bobby Gerhart Jr. looked over his No. 5 Lucas Oil Chevrolet – right down to every minute detail. Friday brought back one of Gerhart’s most vivid memories at the Speedway.

“After I got into a really bad wreck here [in 1994]…and headed to the track the next day, my mother kept telling me how important preparation obviously needs to be here,” Gerhart said. “She said, ‘You need to be able to win the pole. I want you to commit to do that.’”

“I’d like the opportunity to be blessed and get to 10 wins [at Daytona] if I could,” Gerhart said. “If I get to 10 wins I’ll retire right in victory lane. I’ll be done right there.”

While Gerhart’s main focus Friday was on his own efforts, he also took time to share advice with young aspiring drivers like Gus Dean, who has partnered with Mason Mitchell Motorsports to pilot a car during testing.

“Anytime you get the chance to talk to these older drivers who have been there and done that, it gives you that much more of an advantage when you go on the track,” Dean said. “It gets you faster, and it gets you faster, quicker.”

Gerhart, 57, is trying to become the oldest superspeedway winner in stock car racing history. He admits to making plenty of mistakes at DIS since 1988, but he can offer his wisdom to Dean and other up-and-comers.

“I think all I can do is share the bad mistakes I’ve made, the things I overlooked and the things I took for granted,” Gerhart said. “I think it’s very easy for a young guy to get lost in this big thing that is Daytona. You have to be able to separate that and understand we are here to race.”

Dean, a former X-1R Pro Cup Series champion, said he is hopeful of competing in the 53rd annual Lucas Oil 200.

“I feel that we will [make the field],” Dean said. “I’ve run heavy cars like these for a long time. I’m used to the bigger and heavy cars and once I learn how to run a superspeedway, we should be good for the race.” 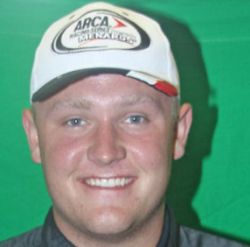 Matt Wallace ready to emerge in 2016:

Matt Wallace grinned, wide-eyed, when he looked out to the frontstretch from the garages. This will be Wallace’s first visit to the track not as a spectator, but as a driver. Wallace, a third-generation racer, will finally get his chance in the ARCA Racing Series presented by Menards.

“Knowing you’re going to be on the biggest of race tracks there is now, running pretty close to 180 miles per hour, that’s kind of a thrill,” Wallace said.

Wallace comes from a long line of racing greats, all who have excelled at the NASCAR level. He is Rusty and Kenny Wallace’s nephew; he is Mike Wallace’s son. Even so, he wants to blaze his own trail.

“Me being a Wallace helps maybe open a door, but nothing to the financial standpoint of getting me a ride,” said Wallace, who is testing for Cunningham Motorsports. “We need to find great marketing partners who will represent me well and I can represent myself well.”

With his family’s support and his own ambition, Wallace wants to be defined not by his family, but defined as himself. But, he’s not about to steer away from the family name completely.

“I want to be my own person and definitely carry the tradition on,” he said.

Daytona International Speedway is the home of “The Great American Race” – the DAYTONA 500. Though the season-opening NASCAR Sprint Cup event garners most of the attention – as well as the largest audience in motorsports – the approximately 500-acre motorsports complex boasts the most diverse schedule of racing on the globe, thus earning it the title of “World Center of Racing.” In addition to eight major weekends of racing activity, rarely a week goes by that the Speedway grounds are not used for events that include civic and social gatherings, car shows, photo shoots, production vehicle testing and police motorcycle training.