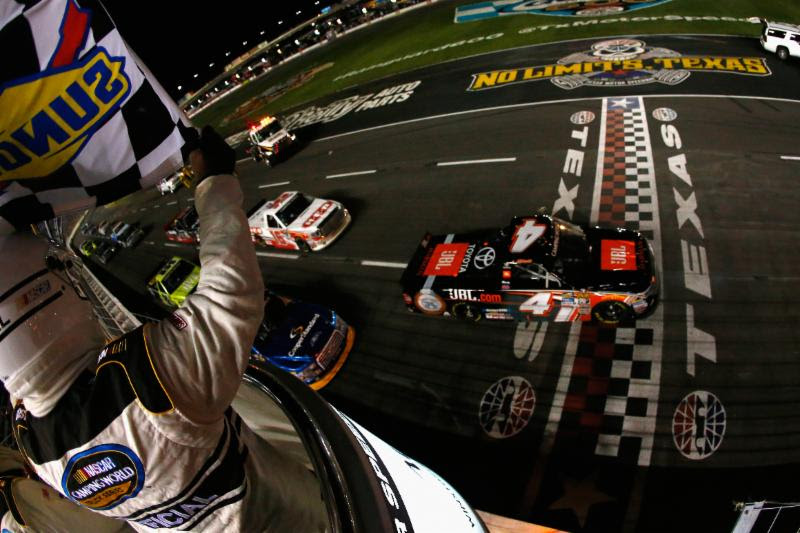 A 22-year-old native of Norman, Okla., who calls TMS his home track, Bell earned his first at TMS, second of 2017 and fourth of his 37-race NCWTS career.
“First off, I want to make sure everyone is OK,” said Bell, driver of the No. 4 JBL Toyota Tundra fielded by Kyle Busch Motorsports. “It’s kind of a sorrow victory here in Victory Lane. That was a pretty bad flip and I’ve taken my fair share of flips and it hurts a lot worse whenever it’s in the grass like that one was, so I hope he’s (Peters) OK. That’s the most important part.
“But second of all, we’re in Victory Lane, so it’s just a dream come true to be able to win here in Texas – my hometown. All of the Tundras are built right here in Texas (San Antonio), so it’s a huge win for us, everybody at Toyota and Toyota Racing Development. Man, our JBL Tundra was super, super good.”
As Bell and Briscoe raced side-by-side for the win after a restart on Lap 166, Self’s No. 22 Don’t Mess With Texas Toyota spun and initiated contact with Peters exiting the dogleg and heading down the track’s frontstretch. Peters’ No. 99 Metabo Chevrolet Silverado spun and caught the infield grass, sending it airborne. The No. 99 wound up on its top, with track safety workers needing several minutes to extricate Peters once the wreckage was turned over.
Peters was evaluated at the track’s infield care center and released.
Briscoe was seeking his first series win and first for Ford this season. It appeared he was going to accomplish both after he took the lead from Bell on a restart following the night’s eighth caution from Laps 155-159. NASCAR’s scoring loop system determined Briscoe was in the lead on Lap 160 of 167 when the yellow again flew on Lap 161 for a three-truck incident in Turn 4. This time, Bell was able to edge Briscoe for the lead.

“I never saw the white flag,” said Bell, who led a race-high 92 laps. “I was concentrating on making him (Briscoe) slow down as much as I can. I didn’t think he had the lead whenever he got it and then I didn’t think I had the lead whenever I got it, so it’s just so tight, man. Me and Chase have known each other for a long time – we’re really good friends and met each other racing online whenever we were in our teens and now here we are racing in the Camping World Truck Series together.”

Briscoe didn’t question the scoring outcome involving his friendly rival. “It was close, I enjoyed it,” said Briscoe, driver of the No. 29 Cooper Standard Ford. “I definitely wanted to get the win. But I was sleeping on couches two years ago and ever imagined I’d be here.”
Grant Enfinger finished third in the No. 98 Jive Toyota, with Ryan Truex fourth in the No. 16 H.E.B. Grocery Store Toyota. Ben Rhodes rounded out the top five in the No. 27 Safelite Auto Glass Toyota.
Bell began the night 52 points behind Sauter in the championship standings. The reigning series champion, Sauter finished eighth in the No. 21 Allegiant Travel Chevy and saw his lead over Bell trimmed to 40 points.
“This place has a special place in my heart,” Bell said of TMS. “We raced down here a lot with Micro Sprints at Devil’s Bowl Speedway (in Mesquite) and Kennedale (Raceway Park) but never at TMS. I was just a dirt track kid from Oklahoma, so to race here is a dream come true.”

Christopher Bell got his first taste of the tricky road course of Canadian Tire Motorsport Park last September, but the full-time NASCAR Camping World Truck Series driver will get another crack at the track prior […]