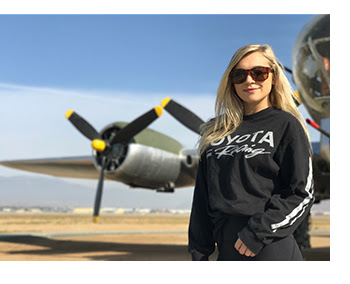 Aiming for a national championship and rookie of the year honors, the popular Eagle River, WI driver is taking the extra attention in stride.

“This is a dream come true,” says Natalie Decker.

“A year ago at this time I was back home in Wisconsin watching this race and working on trying to put a deal together to run a few ARCA races with Venturini Motorsports. Today I’m at Daytona with a full season ride, getting ready to compete in the biggest race of my career. It’s just crazy.”

“I’ve been preparing myself for this moment as long as I can remember. It’s easy to get distracted with all the extra hype surrounding Daytona. But right now my only focus is doing my job. I’m really excited. VMS built me a fast Toyota and now it’s time to drive it.”

Splashing onto the ARCA tour midway through the 2017 season, Decker made six series starts highlighted by two top-10 finishes and a career best seventh-place finish at Road America.

The Lucas Oil 200 Driven by General Tire is the first of 20 races on the 2018 ARCA Racing Series presented by Menards schedule. Practice begins Thurs., Feb. 8 from 4 – 6 p.m. EST. Final practice is Friday morning, Feb. 9 from 9:30 a.m. – 10:30 a.m. Group qualifying is set for 3:30 p.m. Friday afternoon. The Lucas Oil 200, which begins the 66th consecutive season for ARCA, is set to get the green flag at about 4:50 p.m. Saturday, Feb. 10. The race is live on FS1 beginning at 4:30. ARCARacing.com will stream live timing and scoring and chat throughout the entire weekend festivities.

Christian Eckes (No. 15 JBL Audio Toyota) made a statement that he will be a threat for the ARCA Menards Series championship with a dominant victory in Friday’s FORTS USA 150 at Pocono Raceway. Eckes […]

One of the biggest short track hot shoes in America has signed a developmental deal with Roush-Fenway Racing to run with the Roulo Bros. Racing in select ARCA Racing Series events in 2016. Ty Majeski’s […]