One of Australia’s most decorated and admired athletes is stepping down from fulltime duties.

Craig Lowndes has announced he will be stepping away from fulltime duties in the Virgin Australia Supercars Championship from next year.

He will continue as a co-driver for his Autobarn Racing Team and Triple Eight Race Engineering, the team he has been with since 2005.

“I’ve always said there are two key factors keeping me racing and those are my motivation to keep getting up and doing what I love and my competitiveness, and for me, nothing has changed,” Lowndes said. “But at the same time I want to make sure I finish my last full-time season with some strong results in the bag and after this year’s results so far Roland (Dane) and I came to the decision between us that this will be my last full season behind the wheel.

“I feel extremely lucky to have been able to keep doing what I love at a competitive level for such a long time. I have to thank my family and friends, the whole team at Triple Eight and KRE, Supercars, my personal and team sponsors and of course the fans for supporting me throughout. Ultimately, the fans are the backbone of our great sport and the reason I’ve pulled my helmet on every race weekend, so to them, thank you.” 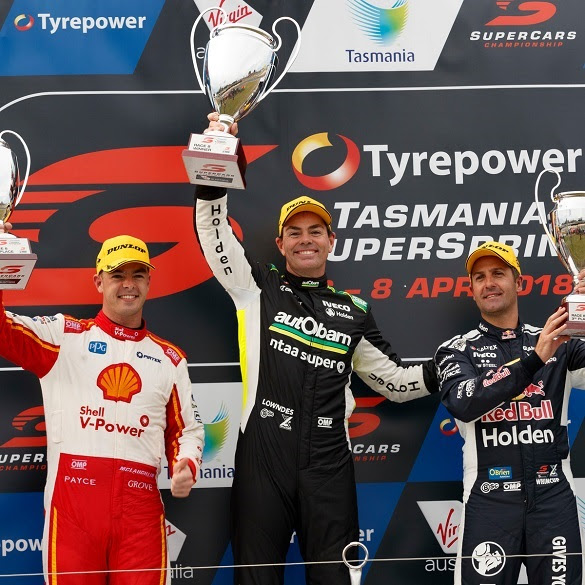 Lowndes was the first driver in history to record 100 race victories at Hidden Valley in Darwin in 2015 having surpassed Mark Skaife’s previous all-time record of 90 wins at Barbagallo Raceway in Perth in 2013.

Heading into this weekend’s Watpac Townsville 400, Lowndes sits fourth in the Championship. Since 2005 Lowndes has not finished outside of the top four in Supercars aside from last year.

Lowndes is one of Australian sports most loved Champions. His popularity has helped him become a household name in Australia, New Zealand and many parts of the world.

The 43-year-old is often compared with his mentor and great friend Peter Brock. One of Lowndes’ most defining career moments was winning the first Peter Brock Trophy, just weeks after the sudden passing of the great Australian sporting icon in a rally accident.

“Because of the nature of the race and the emotion going in with Brock, that race stands out for me as the all-time, no doubt about that,” Lowndes said.

“That was the most emotional I have ever been before or during a race. I spoke to myself, I spoke to Peter. He was there. There was a lot of things that went on during that race that you knew had a touch of Brock.

“To do it in that circumstance and to know what we had achieved. To go through that personal journey was quite special.

“It is a moment in your life you will never forget. It was a great moment but also a very sad moment because we knew why we were there.”
Lowndes will get a have more chances to emulate Brock’s all-time Bathurst record of nine victories.

His early career went from Formula Ford and Formula Holden, then Lowndes burst onto the touring car scene in 1994 with the Holden Racing team, doing enough on debut at Sandown as a late call-up to then also replace Swede Rickard Rydell for Bathurst.

Lowndes became a household name in that Great Race, launching an audacious pass for the lead on John Bowe in the closing stages and eventually finishing second.

He made his full-time debut in 1996, taking the clean sweep of the Supercars title followed by Sandown 500 and Bathurst 1000 victories with Greg Murphy.

Pursuing his Formula 1 dream, Lowndes headed abroad in 1997 to contest International Formula 3000 but he returned home after a tough single campaign.

Two more Supercars titles with HRT followed in 1998 and ’99, before he made the massive jump from the factory Holden team to Ford, with the revamped Gibson Motorsport in 2001.

After a second season with the team, which became 00 Motorsport in 2002, Lowndes was on the move again to Ford Performance Racing.

His only victory of three seasons plagued by unreliability came early, at Phillip Island in 2003.

Lowndes moved to Triple Eight in 2005 and hasn’t looked back.

A fourth title has proven elusive, finishing second in the Championship sixth times including the controversial finish to 2006 against Rick Kelly.

Bathurst has been a happier hunting ground, including a hat-trick of victories alongside Jamie Whincup which started with the 2006 race immediately after the death of Brock.

Back in a Holden following Triple Eight’s brand switch, Lowndes conquered Mount Panorama again in 2010 with former HRT team-mate Mark Skaife, while victory with Steven Richards in ’15 took his tally to six and a record 13 podiums.

While Lowndes endured his first winless season with Triple Eight last year, there’s still plenty of racing in the popular veteran. He will be one of the most in-demand co-drivers on the grid, although 888 have locked their favourite son down for at least the foreseeable future.

Ten out of ten for Whincup in Townsville

Seven-time Supercars Champion Jamie Whincup has made it ten wins in ten years in North Queensland, by claiming victory in today’s opening race of the 2018 Watpac Townsville 400. It was Whincup’s third race win […]

RECAP: It was a mixed day for Shell V-Power Racing Team at the Australian Grand Prix in Races 4 & 5 of the Championship. The heavens opened early in the day, with pouring rain in the […]

Shane van Gisbergen and Jamie Whincup will face off on the front row of the grid for this afternoon’s 250km race at the Coates Hire Sydney 500. The two are separated by 191 points in […]