The race for the 2018 Virgin Australia Supercars Championship title is tighter than ever, with Shane van Gisbergen’s win at the OTR SuperSprint this afternoon bringing the kiwi to within 41 points of leader, Scott McLaughlin.

Current Championship leader Scott McLaughlin finished sixth, with the result bringing van Gisbergen to within striking distance of the lead with just nine races left in 2018.

“It could all change tomorrow,” Van Gisbergen said. “We will have to do some work, the car is not perfect. We need to come back tomorrow with another strong car and do it again.”

Van Gisbergen’s dominance in South Australia has now reached a second track, with the 2016 Virgin Australia Supercars Champion claiming the first ever race win at The Bend Motorsport Park in front of 15,700 fans this afternoon.

The maiden victory at The Bend was his fifth in a row in South Australia, after winning both races at the Adelaide 500 in 2017 and 2018. It was also his fourth win from the past seven races, and eighth top two finish out of the last nine starts.

Van Gisbergen and teammate Jamie Whincup started side by side on the front row of the grid and opened a four second lead over the rest of the field in the opening stages, before the Kiwi made his move on the seven-time Champion to claim the lead in the fourth lap. 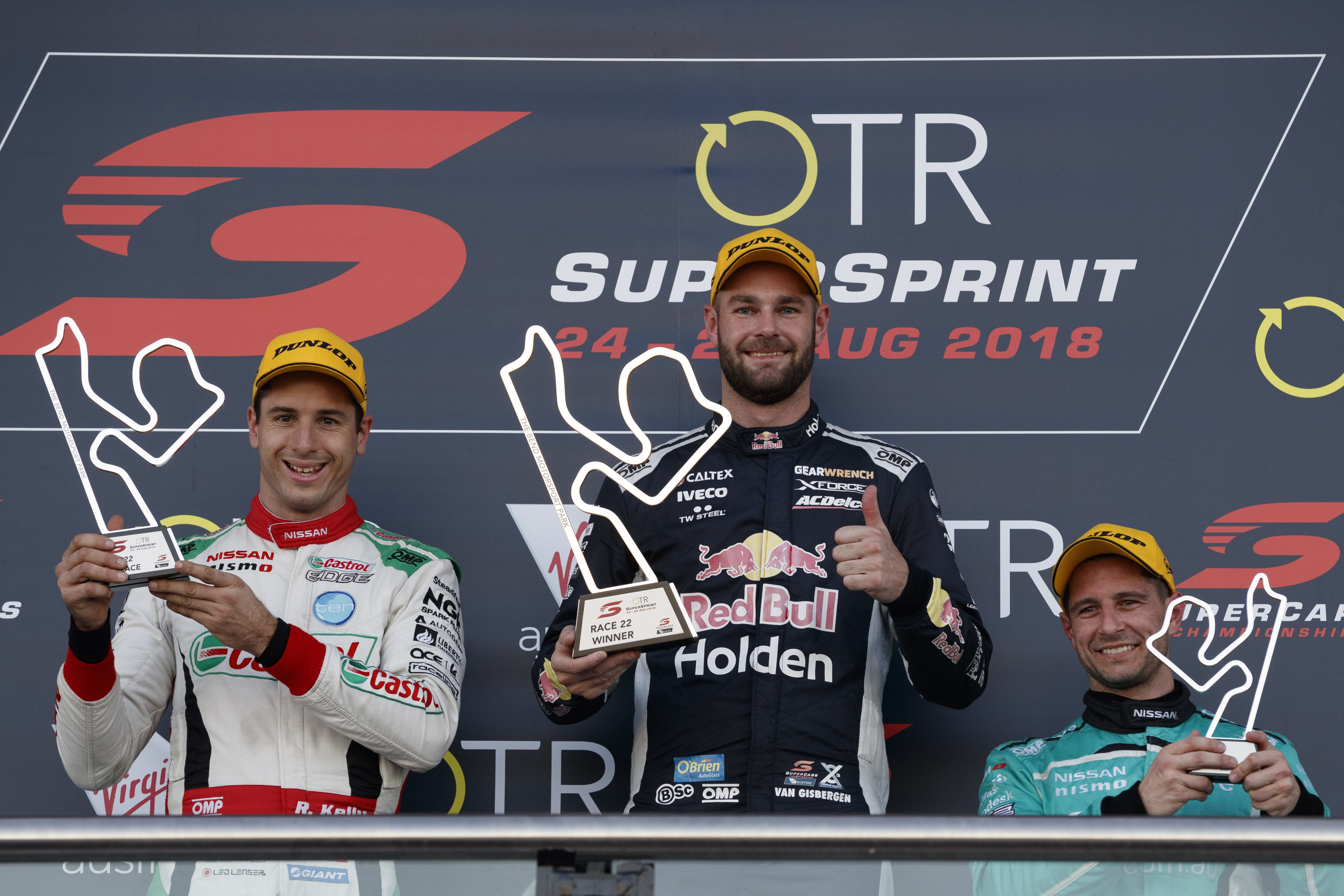 The comfortable lead for the duo was then cut when Garth Tander’s Commodore suffered an engine problem on Lap 6, which prompted the Vodafone Safety Car which brought the field back together.

Every team used the Safety Car period for a quick stop in pit lane, but when the Red Bull duo stacked, Whincup was left waiting behind van Gisbergen and lost six places while other cars re-entered the track.

“I had a good battle with Jamie at the start, but he had to get put back (at the stop). Rick put a lot of pressure on which was really good,” said Van Gisbergen.

“Then it was about staying on the track, it was so hard and very easy to make a mistake. I just tried to behave.”

Kelly and Caruso were competitive throughout, keeping Whincup off the podium. 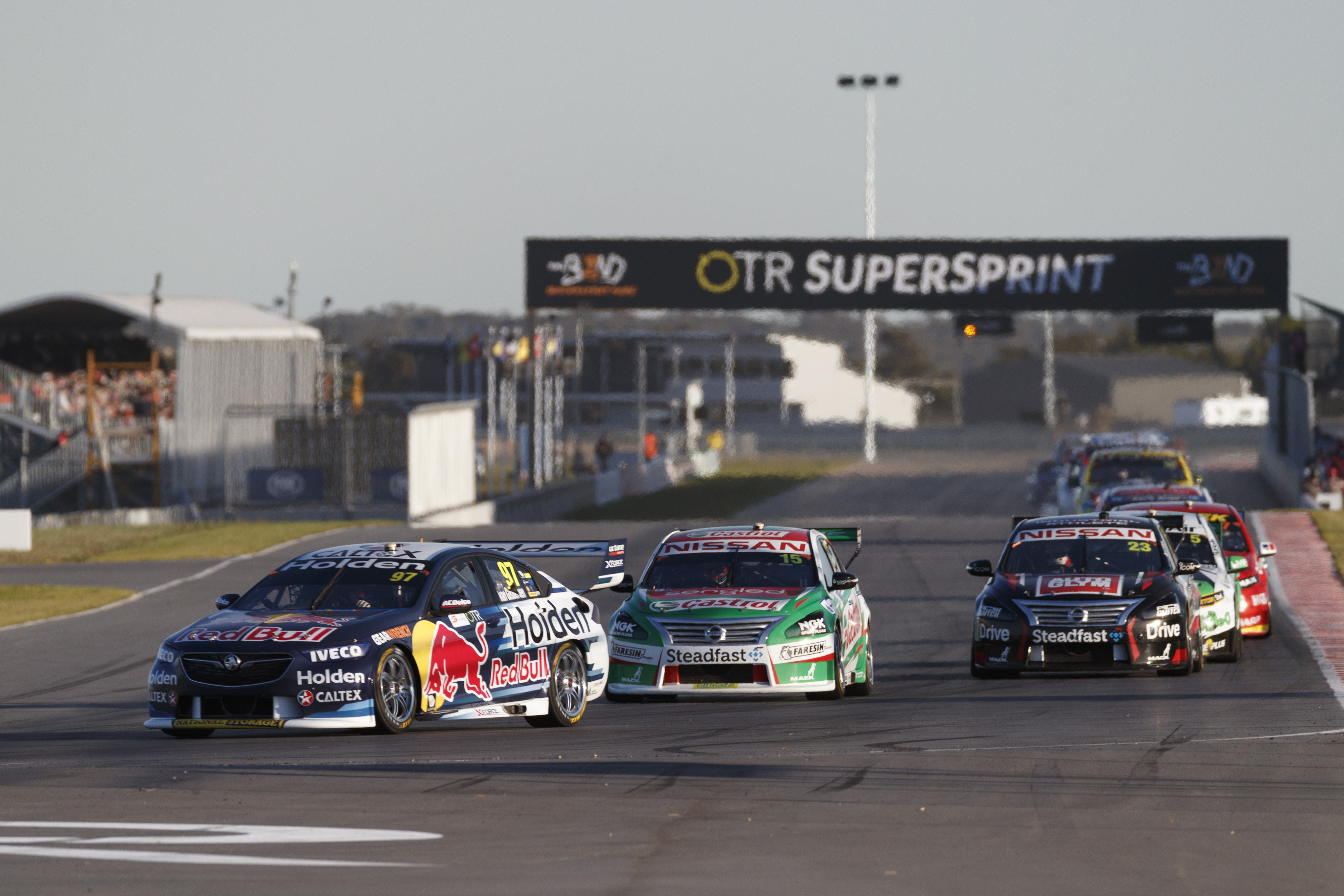 “We are pretty excited to achieve that at a brand new track,” Kelly said. “I had a good little battle with Mike, I am stoked to have him on the podium with me. A good way to start a fresh track.

The big movers today were veterans Craig Lowndes and James Courtney who both started at the back of the grid before finishing 11th and 9th respectively.

“I am not going to lie, I had a lot of fun,” Courtney said. “Something we changed for the race really lit the thing up.”

Teams will go back to the drawing board tonight to prepare for another round of ARMOR ALL Qualifying at 10:55am local time before the final race of the weekend, a 200km SuperSprint begins at 1:40pm.

Fabian Coulthard and Scott McLaughlin will take bragging rights to the next Virgin Australia Supercars Championship event in Tasmania after securing victory at the Rolex Australian Formula One Grand Prix. The Shell Fords were unlucky […]